Leave it to Green Day to start the biggest mud fight in history at a festival meant to incourage peace! The over 350,000 fans watching the show were incouraged to throw mud after one fan did so and Billie picked it up and put it in his mouth. Soon after, Billie began running across the stage while fans threw mud, and he attempted to fight back on his own, needless to say he was a little outmatched. Things began getting really out of control when fans began running on the stage, even Mike was mistaken for a fan and lost three teeth as bouncers tackled him. Billie described it best onstage when he yelled, "this isn't peace it's fucking anarchy." Billie later said, "Going into it I thought that the nostalgia reasons behind the show were kind of a joke. So we went in thinking 'This is lame'. But then it turned into something completely unexpected. To tell you the truth, it was the closest thing to total chaos i've ever seen in my whole life."

Less than a month after their infamous appearance at Woodstock, Green Day performed a free show arranged by local Boston radio station, WFNX. A modest crowd was predicted by organizers but contrary to expectations, and estimated 100,000 people descended on the site. The police and state troopers were out in force aided by a 15-man security team of inmates from the local prison. The crowd control was woefully inadequate and a few minutes after the band had taken the stage, the crash barriers came down. All hell broke loose. "The police were getting beat up and stuff" said Tre. The lighting rig began to wobble and the promoter, concerned the whole stage might fall, pulled the plug. The crowd went mad, causing havoc that quickly spread through the streets of downtown Boston. The local news reported more than 60 arrests and dozens of minor injuries. "They were tear gassing the crowd and all these things", Tre remembers, "next thing their announcing 'Green Day has left the building! Green Day has left the building', it was fucking funny". The band were ushered under the building for their safety and watched the whole fiasco, while the prisons begged for autographs. "The thing is", noted Tre, "not one of them fucked off, they all went back to jail the next day!"

With the Z-100 Christmas show (AIDS benefit) beginning to drag after 7 hours, Green Day needed to be in top form to revive the tired audience. This was the final concert after a long year of supporting their hit album 'Dookie'. At close to 2AM the band finished their set and headed backstage before their encore. Fans would be in for a surprise when Billie returned to the stage wearing nothing but his guitar for a performance of 'She'. "His impulsive need to be noticed turned a musical endurance test into what will be one of the most talked about concerts of the year," reported the New York Post.

Although I can't remember the whole story now that it's been 5 years, I do know Green Day did manage to mess up Jay Leno's green room pretty good after a performance of 'Brain Stew' on the show. After the show, producers found the room an absolute mess with peanut butter spread in the cushions of the couch among other things. They also found an elmo doll hanging from a noose. The reason for the bands anger, Jennifer Aniston was supposed to be a guest on the show and she cancelled.

Billie Joe pulled a Jim Morrison and exposed himself to 6000 or so fans at the Mecca Auditorium, in Milwaukee, Wisconsin. That was, of course, Armstrong's clever way of letting Green Day fans who understand Green Day-ese know that the Mecca was a mediocre show. After Green Day finished their hour long set, police officers took Armstrong to the Milwaukee police station, where he was cited for indecent exposure. After he paid the bail of $141.85, he was released. But why don't we let Lt. Thomas Christopher of the Milwaukee PD explain what happened, as only law enforcement can: "Mr. Armstrong dropped his pants to his knees and exposed his buttocks to the crowd. After the concert, Mr. Armstrong was taken into custody, given a city citation for indecent exposure. He posted a bail and was released." Officers went out of their way not to disrupt the concert, in order to avoid a potential riot. Instead they waited until the last notes were played and apprehended Armstrong on the way to his limo. "The problem was he exposed himself to a crowd of about 6,000 people," said Lt. Christopher. "Including people as young as ten. That was our main reason for taking the action." 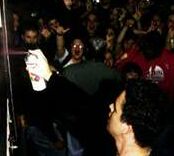 You can start a riot," Billie Joe encouraged the crowd that gathered at New York City's Tower Records for an in-store performance. "It's your prerogative - you can do anything you want, Cuz you're not at Tower Records, you're at a Green Day concert!" During their 45 minute performance: Billie Joe spray-painted "Nimrod" in black and red on store walls, showered beer and water over CD racks, and body surfed over the crowd to reach the window, where he spray-painted "Fuck You" on the window and then pulled down his pants to moon the crowds gathered outside. A store manager forcibly had to wrestle a 200-pound monitor away from BJ, who attempted to throw it over the staircase landing where the band played. Tre managed to hurtle a bass drum over the ledge. "The store couldn't handle it" a grinning Tre Cool said later.

The infamous Sunset Marquee was in for a shock when Green Day stayed there. First off, Mike kicked off the night by squatting over his hotel balcony and shitting on Juliette Binoche's patio below. Binoche meanwhile was off picking up an Oscar at the Acadamy Awards. "It wasn't me," said Dirnt, "Ok, maybe it was me. But as they say, shit happens." Tre remembers, "She was so pissed. She tried to get us thrown out of the place. But they let us stay...big mistake." Tre then nabbed the guest register from the reception area after he discovered the Rolling Stone's where staying there, and made a series of late night calls to Keith Richards. Later that night, one of the band members (which one is a mystery, but my money's on Billie) walked down the hotel corridors knocking on peoples doors, naked. Billie then almost got in a fight was some 80's pop star, and they then topped off the evening by throwing their tv out a third story window. "Glass was everywhere, thats all I can tell you," said Billie, "You have to live that arrogant lifestyle now and again."

The band was escorted from an Australian TV studio when they spontaneously performed the track "Grouch" while appearing on the show "Recovery TV." Anyone familiar with that particular number is well aware that its lyrical content (especially the chorus of "The world owes me, so fuck you") makes for something less than family viewing. On top of that, the band (who were not scheduled to perform on the show) hijacked instruments from the house band for the performance. After whipping the crowd into a decent lather, the band wrapped up its song, and was promptly escorted out of the building by studio security.

A fight between Arion Salazar of Third Eye Blind and Mike began after Green Day's set as part of the Weenie Roast when Salazar ran onstage and bear-hugged Dirnt. Mike, apparently surprised by Salazar, then allegedly kicked and hit Salazar, leading to a scuffle onstage and later backstage after the show. Backstage Mike was hit in the head by a beer bottle by either Salazar or a fan protecting him, causing a skull fracture. In a statement released by Third Eye Blind's management, Salazar said, "I am sorry that my attempt at doing something I thought would be funny escalated into Mike getting hurt. That was never my intention. I simply had too much to drink and made a very bad decision. If I had been in Mike's place, I'm sure I would have acted similarly. My heart goes out to him and I hope he recovers quickly. We have many friends in common and I just hope that he can accept my sincerest apology. I am sorry, Mike." No charges were ever laid in the matter.