The Citizen That Didn't Give a Damn 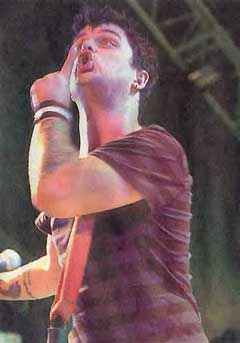 Green Day on stage is the art of anything joyful, a fun madhouse which asks no questions and cuts into the underbelly. Last night, in Avenches, in the middle of a packed house, the three retarded adolescent, millionaires (by itself the album Dookie sold 10 million copies)  literally set the place on fire.

No logic here: dislocated and piled on the front of the stage, the drums on fire, they played an hour and a half with an improbable sound and, evidently, definitely deprived and conquered audience of encores in front of high columns of black smoke. Unique survivor of this fiery chaos - extreme characterization but it had to be tried! - Billie Joe through out the tranquil chords of Good Riddance, an acoustic ode to the "I-don't -give-a-damn"' ism and to adolescent nostalgia. Punk lyricism?

A few hours before, the thirty-something singer confessed his conception of Rock and Roll: "The only thing that interests me, is not to think too much, to play the most possible, to live intense moments and share them. I don't give a damn about theories, only the moment counts.... Rock and Roll means: do it as you understand it, protect your individuality and bug (annoy) the world! That's always been my motto"

Sitting next to him, his nose in his beer, his two buddies nod their heads. Talented guys trapped in the muck of "show business punk" since the success of Dookie, the Green Day three don't feel like talking about the phenomenon that they don't understand and which bores them. "You ask me if I feel responsible for the change in alternative rock in the last 10 years? Absolutely not! You have to blame Kurt Cobain! If he hadn't killed himself, he wouldn't have left us in this shit!" (Laughter.)

A large backfire down the block, breaks the lazy atmosphere surrounding the three musicians. "A riot? Everyone into the street!" yells the bass player. BJ: "I love riots! But I think rock is even more stupid than usual when it tries to be revolutionary! You have to draw the public's attention to specific facts: We were for the squatters in San Francisco, we took Green Peace and Ant-Racist groups on our tours...but you can not expect to become the only defense against capitalism or anything like that" Not so insensitive to the world after all? "I voted for Nader" says a  very serious Billie Joe all of a sudden before starting on a long diatribe on the current occupant of the White House "George W. Bush is a thief and a toad. History will judge him"

For Green Day, the future looks like a Greatest Hits ("No, a Super Hits! At least 16 songs") for this Fall, and an album still in the making. Billie Joe's passion for Gorillaz - Damon Albarn of Blur's group - , admitted at the beginning of the interview, leaves all guesses open.

endless thanks to Claudette for the translation