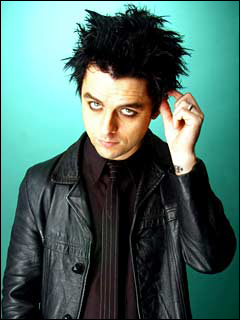 FAMILY : Billie's father, Andy, died of cancer when he was 10 years old (September 1982). His mom, Ollie, raised him from then on. He has 5 older siblings (David, Allen, Marcy, Holly, and Anna).

RECORD COMPANY : Billie and Adrienne have co-ownership of Adeline Records.

OTHER BANDS : Billie still plays with Pinhead Gunpowder. He has also played with The Influents, Corrupted Morals, Rancid, the Lookouts, Goodbye Harry, and Blatz.

Billie Joe Armstrong was brought into this world on February 17, 1972, the youngest of six children. His father, Andy, was a part time jazz musician and a truck driver for Safeway, while his mother was a waitress at a local restaurant named Rod's Hickory Pit. Billie started singing when he was just 5 years old. He would go around to hospitals and sing to the patients to make them feel better. Then he got to record his first song, "Look for Love" at a local recording company named Fiat Records. Billie got his first electric guitar, the infamous "Blue" (a Fernandez Stratocaster), when he was 11. Billie still uses Blue to this day and has several replicas of it. At the age of 10, Billie's father died of cancer to the esophagus which spread throughout his body. His mother continued to work at Rod's Hickory Pit (a barbecue joint owned by Richard and Alice Cotton) in Vallejo, California, to support herself and her six kids. Billie Joe and Mike later worked there as busboys. Two years after the death of his father, his mother remarried to a man that Billie and his siblings detested.

Billie was 10 when he met Mike Dirnt in the school cafeteria in 1982. During sleepovers at each other's houses, they played songs by old heavy metal warhorses such as Ozzy Osbourne, Def Leppard, and Van Halen. Other influences would be the "thrash and drang" of the Bay Area's alternative music culture percolating throughout the eighties. Clubs such as Mabuhay Gardens and Berkeley's 924 Gilman Street regularly showcased local groups like the Dead Kennedys and Buck Naked. He wrote his first song, "Why Do You Want Him", a song about his mother and his step father, when he was 14. At the age of 15, Billie, Mike, and a drummer named John formed a punk band and named themselves Sweet Children. Their first gig was actually at Rod's Hickory Pit. One day before his 18th birthday, and halfway through his senior year of high school, Billie dropped out of high school (Pinole Valley High School) to devote all his time to Sweet Children. He knew what he wanted to do -- play music, and school was just getting in the way. At this point, Billie had the nickname "Two Dollar Bill", referring to the price of the joints he sold. 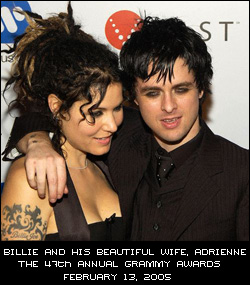 In 1990, John left the band to attend college. Billie and Mike were faced with the task of finding a new drummer. They knew the perfect fit, Tre Cool, a Gilman Street vetran, who was then playing in the Lookouts. Later, Sweet Children was renamed Green Day. Before they knew it, they were traveling all over the country in an old bookmobile with Tre's dad at the wheel. They did all this with little money and staying at fan's houses. It was in Minneapolis in 1990 when Billie first laid eyes on his future wife, a girl named Adrienne Nesser. They dated awhile and then were married on July 2, 1994, a 5 minute ceremony. The day after their wedding, Adrienne found out she was pregnant. Their son, Joseph Marcicano Armstrong, was born in March of 1995. Three years later on September 12, 1998, another boy, Jakob Danger was added to the Armstrong family. Today, Billie, Adrienne, Joseph, and Jakob reside in Oakland, California.

The Cottons sold Rod's Hickory Pit in 1988. It eventually became a Korean karaoke joint and was torn down last year to make way for a strip mall. - Courtney Smith