to design and produce a punk-inspired collection 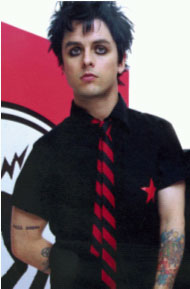 SANTA ANA, Calif.—Iconic punk rocker Billie Joe Armstrong is teaming up with Rock Steady Clothing Company to produce a new line of apparel geared towards the alternative/punk scene.  Named after his record label, Adeline, the new line of men’s and women’s shirts, tees and accessories will be released during the upcoming MAGIC Show in Las Vegas, from August 29 – September 1, 2005.

The punk-inspired line of clothes will feature a variety of styles for both men and women craving an edgy look.  The men’s collection will consist of long-sleeved and short-sleeved button-ups, tees, fitted jackets, and tapered pants.  The women’s collection will feature woven tees, hoodies, dresses and button-up tops.  Other highlights will include a variety of accessories including beanies, cadet hats and ties.  Additionally, each piece will feature the Adeline logo, different for men and women, setting the brand apart from other mainstream labels.

Partnering with his wife, Adrienne, both will be involved in the overall look of the line.  Clothing manufacturer Rock Steady will guide the two on the development of the line and will be responsible for making their designs come to life.  Adeline will be right on track with the couple’s unique, fashion-forward style.

Billie Joe’s enthusiasm for the brand will play an active roll in promoting the Adeline collection. By wearing pieces from the line during television appearances and magazine photo shoots, fans and customers will have immediate exposure to the clothing and accessories.  Green Day is also on tour to continue the success of its American Idiot album, where the frontman will also be seen adorned in his self-designed clothes.

Rock Steady, a division of Steady Clothing Inc., is a fashion-forward line with a hardcore twist.  Rock Steady’s signature embellishments, finishes, custom buttons, fitted bodies, unique fabrics and custom screen-printing made it the ideal choice for the Adeline collection.

Adeline by Rock Steady will debut and be available for purchase at the upcoming MAGIC Show with a limited number of pieces.  A full launch of the entire collection will make its debut at MAGIC in early 2006.